Fall Ball Coming to a Close

The Myers Park Trinity Fall Ball season comes to a close this weekend. Players will head into winter and other activities, and hopefully retain much of what they learned over the last two months.

Our fall program was started in the early '90's with the help of guys like Tom Marshall, Bo Thomas and Zan Copeland. The goal has always been to provide a fun, non-competitive instructional league to help our players develop. Each game is viewed as a learning experience and a chance to practice new skills and gain confidence. I believe we have accomplished that goal. Yes, Fall Ball games can often get sloppy and be frustrating to some, but that's what happens when kids are learning and practicing new things. Better to get that out of the way now than in the spring season when the scoreboards are on and standings are followed.

Read more »
Posted by Brandon Merchant at 10:58 AM No comments:

﻿
﻿1952 is pretty well known as the year our league began. But before there was a Myers Park Trinity Little League, or even a Myers Park Civitan League, there was the American Business Club League. And our own Harry & Bryant team was a part of it.

That's Don Bryant on the left getting the HB boys ready for Opening Day in 1951. His new squad was one of eight entries in the unofficial and unchartered city-wide league that began play in July of that year. At the time, Little League Baseball had over 2,000 teams around the nation, mostly in its home state of Pennsylvania. Men like Vic Westmoreland and Ken McCollough helped bring it to Charlotte. As you can see in these articles from the Charlotte Observer, the idea gained popularity and came together quickly - from the initial planning, to organizing the details, to scheduling opening day.

The following year there would be three separate leagues in our community, one being our own Myers Park Civitan League. And the year after that there would be farm teams introduced. But those are stories for another day. For now, let's appreciate Harry & Bryant as it prepares to celebrate its 60th anniversary.

Posted by Brandon Merchant at 1:08 PM No comments:

Email ThisBlogThis!Share to TwitterShare to FacebookShare to Pinterest
Labels: History

Email ThisBlogThis!Share to TwitterShare to FacebookShare to Pinterest
Labels: Events 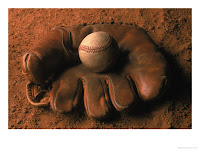 Here's an idea we should bring down from New York:  Sandlot Day, which was promoted by the SUNY Youth Sports Institute in Spring 2010. No coaching, no uniforms, no umpires, no money, no spectators. Just the kids, a few balls, and maybe some wood bats. The parents can do their own thing, and most importantly, the kids can do theirs.

We might want to keep this in mind for next year. In the meantime, the fields are always there. Baseball is a fun game, whether it's organized or not.
Posted by Brandon Merchant at 4:03 PM No comments:

Email ThisBlogThis!Share to TwitterShare to FacebookShare to Pinterest
Labels: Fun

Rhymer Fitness, an MPTLL sponsor, is hosting a free nutrition and mental toughness seminar on Monday, November 1 at 6:30pm at B&B Batting Center in Indian Trail. The seminar will cover topics such as supplements, protein, carbohydrates, fish oil, the dangers of performance enhancing drugs, proper hydration and more. For more info, visit B&B Batting Center.
Posted by Brandon Merchant at 4:01 PM No comments: 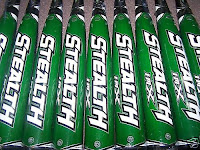 Minor update regarding Little League's position on composite bats (see my previous post about this issue).....

Little League has contracted with the University of Massachusetts at Lowell to immediately study the performance levels of various composite bats to see which ones are considered safe for play. They plan to announce their findings by the first of the year.

As of now, most composite bats are still allowed in the Major League division and below. But any models that are found to have a Bat Performance Factor (BPF) or Accelerated Break-In (ABI) measurement beyond Little League limits will most likely be banned for 2011. Stay tuned....
Posted by Brandon Merchant at 10:19 AM No comments: 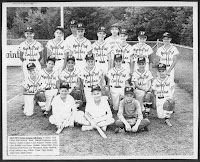 The history of Myers Park Trinity is a large part of what we are today. As the oldest existing Little League organization in Charlotte, we have a tradition and a respect for our history like none other.

But much of that history has been passed down by word of mouth and is at the risk of being lost or accidentally rewritten. So I have set out to document our history using pictures, first hand accounts, draft records, scorebooks and newspaper clippings. Much of the work was done by a few of us prior to the league's 50th anniversary in 2002. But many holes remained and inaccurate legends persisted.

The MPTLL History Project will attempt to document as many facts as possible that make up our real history. The main part of this endeavor is to track the history of our oldest and most prominent division of play - the Major League division. It all began is 1951 with Harry & Bryant, and we became a chartered league - the Myers Park Civitan League - in 1952 with HB, Al Browne's Service, Farmers Dairy and Blythe Motors. But what happened the next year?

Read more »
Posted by Brandon Merchant at 3:55 PM No comments: 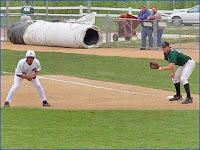 Little League Baseball announced on September 27 that it will expand its pilot program involving use of the "50-70" field for the 2011 spring season.

Last year this optional program was available as a 12-13-year-old division for leagues choosing to use Junior League rules - most notably allowing baserunners to take "leads" from bases before a pitch reaches home plate -  but on fields with 50-foot mounds and 70-foot basepaths.  It was viewed as a transition from the 46-60-foot Minor and Major League field to the 60-90-foot field normally used for Junior League and beyond.

Based on feedback from leagues around the world, Little League will continue the program in the coming year and has added the option of an 11-12-year-old 50-70 division. In this new "supplemental" pilot program, Junior League rules will be used, but the bats must be the 2 1/4" barrel variety approved for the 12-and-under divisions. 11-12-year-old Tournament Rules (All-Stars) would remain under 46-60 rules.

This style of baseball is still optional, but I would expect some area leagues to try it out next season. Several of them have an 11-12-year-old Majors Division anyway (MPTLL's is 10-12), so rules and field modifications would be the biggest changes.

Read more »
Posted by Brandon Merchant at 1:01 PM No comments: