Friday and Saturday's rain has caused a complete change to the tryout schedule for MPTLL 6-12-year-olds playing Major League, National League or American League baseball. If you have a child in that group of players, please visit the new tryout schedule, find your specific date and time, and click to send a message to the league confirming that you are aware of it. 10-, 11- and 12-year-olds are now all scheduled to tryout on Sunday, Feb. 24. All others have been assigned times for the weekend of March 2nd and 3rd.

Please continue to monitor your email, the league website, this blog or the MPTLL Twitter feed for potential changes. (Follow us at www.twitter.com/mplittleleague for instant updates.) The fields are holding a large amount of water and will need to dry out overnight in order for Sunday tryouts to remain on schedule.
Posted by Brandon Merchant at 3:29 PM No comments:

Email ThisBlogThis!Share to TwitterShare to FacebookShare to Pinterest
Labels: Tryouts 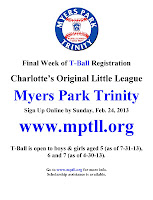 Myers Park Trinity Little League has space available in its T-Ball division for the 2013 spring season.  Registration for T-Ball will remain open until the end of the day on February 24th.


Note that registration for softball and baseball (for ages 6-12) is now closed. Registration for Junior League (ages 13-14) and Junior Legion baseball (ages 15-17) remains open until early April.
Posted by Brandon Merchant at 9:37 PM No comments:

Email ThisBlogThis!Share to TwitterShare to FacebookShare to Pinterest
Labels: Registration

Registration for T-Ball and Little League Baseball (ages 5-12) and for Girls Softball ends this Sunday, Feb. 17. Sign up online today.

Junior League - Information regarding Junior League (13 and over) registration is here. Those sign-ups will continue a bit longer but keep in mind that 13U Challenge registration ends on Feb. 19. Contact Mark Mensheha if interested.

If you have a friend or neighbor that might be interested in playing, please let them know about MPTLL. Time is running out.

Posted by Brandon Merchant at 11:07 AM No comments:

Email ThisBlogThis!Share to TwitterShare to FacebookShare to Pinterest
Labels: Registration

Baseball For Life, a new non-profit organization co-chaired by Ed Walton and Mike Shildt, will be having a coaches clinic this Sunday from 1:00-4:00 at Weddington High School specifically geared toward youth coaches. This is a great opportunity to learn from many of the best coaches around Charlotte. It's free but you must register online. There is more info here and in the video below.

Posted by Brandon Merchant at 2:15 PM No comments:

Best of MPTLL #6: Fields and Facilities

Myers Park Trinity Little League is blessed to call Randolph Park its home. The Marshall-Caudle Little League Complex is the result of a little luck and a lot of hard work. It began to take shape after three decades of play on borrowed land across Randolph Road.

Here is what the area looked like in 1961. In that satellite image, E.C. Griffith Field is at the top left section of the photo. Caudle Field would be built just to its north many years later. What we now use and call "Grier Heights #1" is top right, directly across Randolph Road. At the bottom left is the old Culp Field, our Pony League / Babe Ruth field, before it became overgrown with ivy-covered outfield fences. And at the bottom right portion of the photo is the farmland that would become Randolph Park. Wade Field now sits directly across the street from where Culp Field once was.

When Lloyd Caudle, Tom Marshall and other volunteers secured the use of the Mecklenburg County land that is now Randolph Park in the early 1980's, it was originally constructed with two Little League fields and a Babe Ruth field. The Little League fields had dirt infields, no mounds and no outfield fences. Their were no bleachers - only a long concrete slab on each side of the backstop for fans to sit on. The dugouts had no roofs. There was a two-sided wooden scoreboard between the fields along a dirt walking path, which led to a small cinder-block concession stand (now "Billy's Building"). The fields were called Randolph East and West (later Kiser-Chapman) Fields, and they are still in use today.

Read more »
Posted by Brandon Merchant at 1:47 PM No comments: